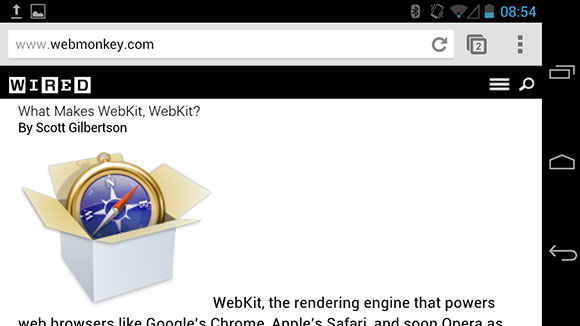 According to Google, the latest version of Chrome for Android improves on Google’s Octane benchmark tests by 25 percent on average. While benchmarks aren’t always the best indicators of real-world performance gains, the speed boost should mean that JavaScript-heavy pages like Gmail or Facebook load a bit faster.

The performance improvements aren’t just in JavaScript either. Scrolling webpages is much smoother and, most noticeable in my testing, pinch-to-zoom is much more responsive with none of the stuttering and lag that marred previous releases.

Other nice improvements include the ability to keep web audio playing even if you switch to another app (handy for music streaming sites), and support for coming web standards like CSS Filters.

Google has also released an update for Chrome on iOS, though the changes on the iOS side are largely cosmetic. Apple’s App Store policies prevent Google from including the V8 engine in Chrome, so iOS users won’t see any speed improvements. There are however a few design tweaks, like a unified search/URL bar and a quick way to see the entire history of a tab by holding down the back button.