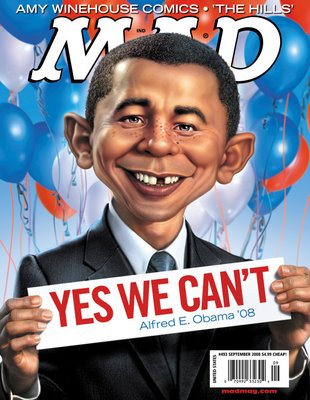 Just reading the news in in.gr and saw the article regarding the invitation of Obama’s team for the re-election campaign for the 2012 Presidential Elections.

Well it seemed like yesterday when he elected as President and his moto “Yes! We can!” echoing all around the world. The first African-American President in the US was elected. After a lot of… movies and series… USA voted for an African-American. Showing that some things can be different! Well, some other things like wars (financially & military) still exist! Wars have no racist attitude!

Obama was a legitimate choice of the citizens of US and if he managed to be re-elected it will be again the choice of US citizens.

Based on the… whispers from the other side of the Atlantic, Obama seemed to be a good communicator, an excellent speaker and a visionist but his Presidency needs some more time in order to show the real change in many aspects of the American life. As he said on the 100th day of his Presidency (29th of April 2009 – my birthday!) “The first hundred days is going to be important, but it’s probably going to be the first thousand days that makes the difference.” But can he REALLY make changes in the way Americans live? Can he go against the stream? Against the power – “the Tsunami” – of lobbies? CAN HE?

Well, nowadays, people, not only Americans, need rapid changes in their misery lives. They don’t afford any more delays, any more excuses. They want to live and live with dignity.

They need no Messiah but a team of Messiahs in order to feel secure and happy. They need truth, as hard as it might be, and honesty. They need a leader and not a Muppet…

They need the exact opposite of the ones that Govern Greece actually!

I am not quite sure that Obama will manage to be re-elected. I guess we need to see who is going to be the adversary and how is going to defend the mistakes or delays his Presidency made. (For sure it was 100 times more successful than Bushes…)

But I bet (based on the first 2,5 years of Obama’s governance and the sort history of the States) that the rest of the world will not see any radical changes in the foreign policy of US… I hope to be wrong, but I am afraid I am on the safe side for that bet.